Sleepovers seem to be the big milestone for our family this year.  Nevermind that Henry's friends have had half of their teeth fall out and he is yet to lose one.  Or that we're still working on tying shoelaces (damn fine motor skills), and this summer will be all about tackling riding a bike without training wheels.  So for now, in what's left of this winter, we are all about sleepovers.

Henry went to his first sleepover last night and the text i just got indicates it was a success.  The stars aligned and Silas was also out of the house for awhile last night.  He was invited to his first sleepover but isn't quite ready.  So instead he went for a "night-time play-date."  We picked him up close to 9 and then at his request he had a "sleepover"  in our bed.  The getting to go to yoga and then dinner with JT without paying a babysitter was awesome.  The sleepover guest in our bed-- not so much.  Imagine this but with a bigger "baby."

I still remember my first sleep over-- Angela Ballengee's house.  I think i was 5, maybe 6.  I knew it was a big deal because my mom was so excited.  And it was catching.  Henry and Silas had their first sleepover guest tonight and so far so good.  They're still chattering a bit after 9:30 but i believe they'll be quieting down soon for sleep.  They're all three on the floor on a big pile of blankets and looking forward to a morning of plants vs. zombies and waffles.

I had hoped to make homemade muffins, but with a crazy workday, a flat tire this am, and a snowstorm-- let's just say toaster waffles will fit the bill.  Here's to happy memories and not having to tell them to quiet down again!
at 9:43 PM 1 comment: 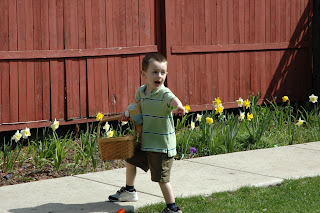 When i downloaded pictures from my camera this morning and they spanned easter to end-of-school activities, it confirmed something i had been sensing, our rhythms have definitely changed this year.  While our focus for the past few years has been firmly on our family and close friends, we've shifted a little bit more outward in the last 6 months.

Henry and Silas are both enjoying close friendships with school friends that have resulted in drop-off playdates (i time i thought i'd never see with Silas).  And with all of our family friends moving to the burbs, we've developed some close new friendships with neighborhood families we've met through the boys' school. 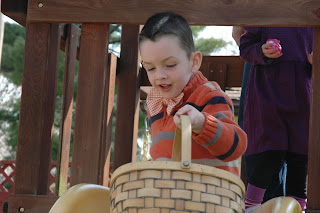 All to say our center has shifted to very close to home, and yet focused more outwardly than when the children were te-niny.  I've gotten very involved with the parents group at the school (check us out, www.friendsofgoetheschool.org) and we find ourselves spending our weekends at the farmers' market, the playground, swimming at Humboldt beach; all things we can walk or bike to.

So check out the April-June photo album for a recap in pictures!

There were the boys' actual birthday celebrations: 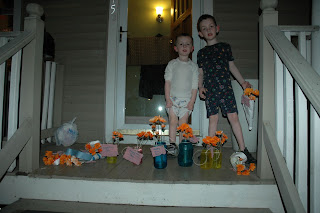 Multicultural day--  the preschoolers represented Jamaica and sang "dei-o" and kindergarten did the Chinese fan dance. 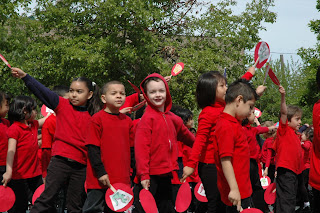 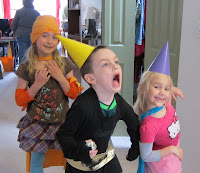 Last Saturday we celebrated the boys' birthday with a superhero bash.  It was tons of fun, honestly.  I think i found the perfect birthday-party-at-home formula.  Drop-off for all the parents that aren't your closest friends so you can focus on the party and not entertaining other adults; add 6 family and friends that know their way around your house, pitch in without asking, and have lots of simple but fun activities.

After briefly flirting with a CareBears party a few months back the boys chose a superhero theme for the party.  I started doing some online research and compiled some great ideas that guided our party*.

It came down to the last minute, but the boys finally let me take their picture, outdoors, in decent light, in full superhero regalia.  I used this, along with picnik to create really simple invites which i printed at home on photo paper i found at the thrift store (4 in stack of paper for .80$!) 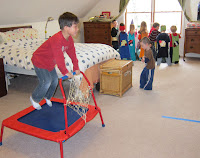 Guests arrived and their custom capes were draped over the back of their chair.  They could choose any color arm warmers they wanted, along with a mask.  I intended for them to color and decorate them, but not so much.  There was also batman coloring book sheets, word puzzles, etc. on the table which kept 3 kids totally occupied and happy.  The other 9 ran around like superheros of course! 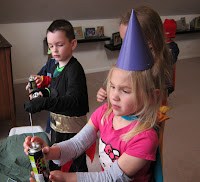 The party started at 11 am and by about 11:30 we headed upstairs for the Superhero Training Academy.  There was the "batcave" of course, in which each child had to crawl through a tunnel and retrieve a glow stick from the inside of the cave (small tent in a closet).  Another spot was Spiderman's Web-Jumping practice and finally there was "spray the villians."  I think all a hit.  We put the kids into two groups-- the younger ones and the older ones and roughly rotated.

Then it was back downstairs for lunch at almost noon.   Hotdogs, fruit, veggies, cheese and crackers.  Nothing cute, just easy finger-food which provided something for everyone.  Because while almost all kids love hot dogs, Silas does not. ("They make my breath smell stinky.") 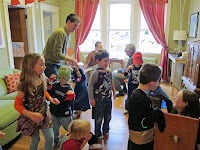 I believe there was a little free play and then an impromptu dance party which was a huge hit.  We played freeze dance with two songs and the kids had a blast.  Definitely going to work this into all future parties.  At this point i lost track of time but it was about time to head down for the pinata. 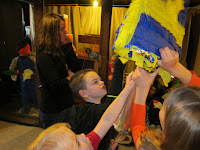 The weather was really terrible and the only upside was that it was predicted that way well in advance, so we didn't even try to set things up outside.  The cape pinata was awesome, but i need to remember that all those kids are stronger than i think.  A few didn't get a chance to whack it, but all was forgotten by the time they were scooping up candy. 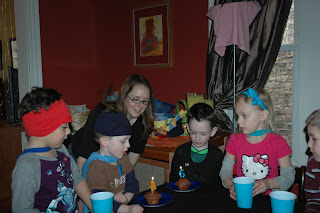 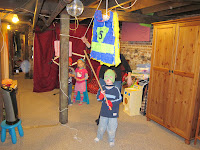 A visit from the cupcake thief who claimed to have eaten all the cupcakes, and then it was time to head upstairs for happy birthday and cupcakes.  We had about 20 minutes after the kids finished eating and i realized i had forgotten one activity.  So up the stairs we went again.  Each kid got a unique superhero card, they had to find 3 more just like it hidden all around the room.  I set it up as a cooperative game, there was no prize for finding them fastest, you just got to keep the cards, and help the others that couldn't find there's yet.  Sorry Owen, we still haven't found your 4th card! 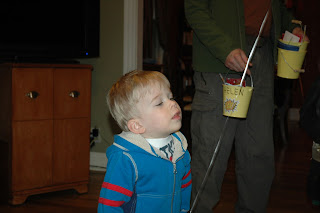 Then back down for good and right on time the drop-off parents came to retrieve their precious little ones.  Everyone got a "goody bucket" with their glow sticks, gloves, mask, stickers, little superhero blank book, and their notecards.  They also got to take a balloon-- one or our birthday traditions.  And don't forget the capes!

:: celebrating Silas' last day as a 3-year old
:: anticipating his 4th journey around the sun tomorrow
:: planning a whole day in pajamas with nothing on the docket but playing with new toys, friends, and eating the birthday boys' favorite meal, pesto!
at 9:25 PM No comments:


Right now, I am...
:: loving JT being here in the evenings. Managed to go upstairs and to the basement without feet pounding on hard wood and shouts of "Mom where ARE you?"
:: checking the seeds we planted last weekend for spouts, as well as the bulbs just starting to peak out of the ground in the front.
:: making lists to stay on top of my FOGS  volunteer efforts and my project plans that multiply by the day
:: inspired by the butterfly breaths and quiet breathing Silas' preschool class demonstrated Thursday
:: preparing to celebrate the return of spring
:: reining-in the long posts i compose in my head each night so that i might sleep
Wishing all of you wonderful "right nows" for the weekend.
at 11:04 PM 1 comment:

Think i had to wait for this post until there was evidence that winter would one-day end. We've had a few amazing days of warmer temps, melting snow, and a hint of warm days to come (not for awhile after this blip, but still). 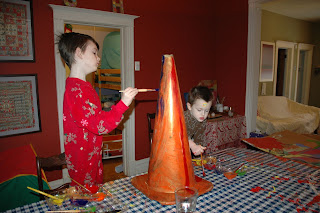 Now that i've been out of the tropics for 20 years and in Chicago for 10 i've finally found some rthythm with the four seasons. Having a parka has definitely helped. So has looking for food, and projects, and outings that are special to the season. There has been indoor stuff-- lots of painting, pajamas and having friends over. 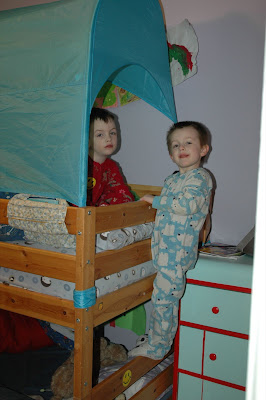 There have also been outings to the aquarium (and another one with Silas' class tomorrow) and lots of time spent playing in the snow.  Because there was snow, and some more snow, and finally some weather that wasn't too freezing so we got to get outside, build a snowman, a snow cave and do lots of climbing on the snow mountain that was in our front yard. 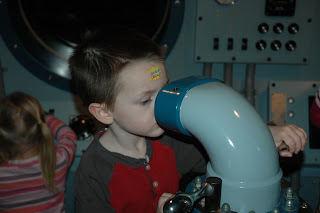 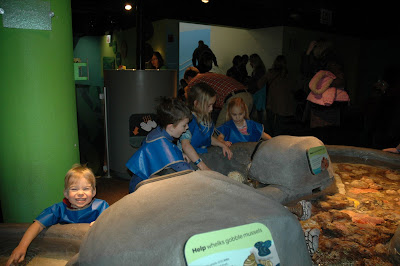 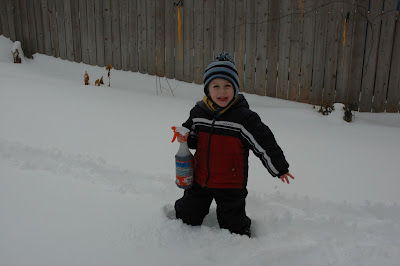 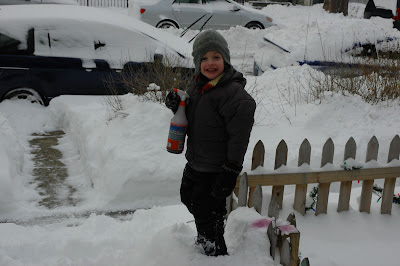